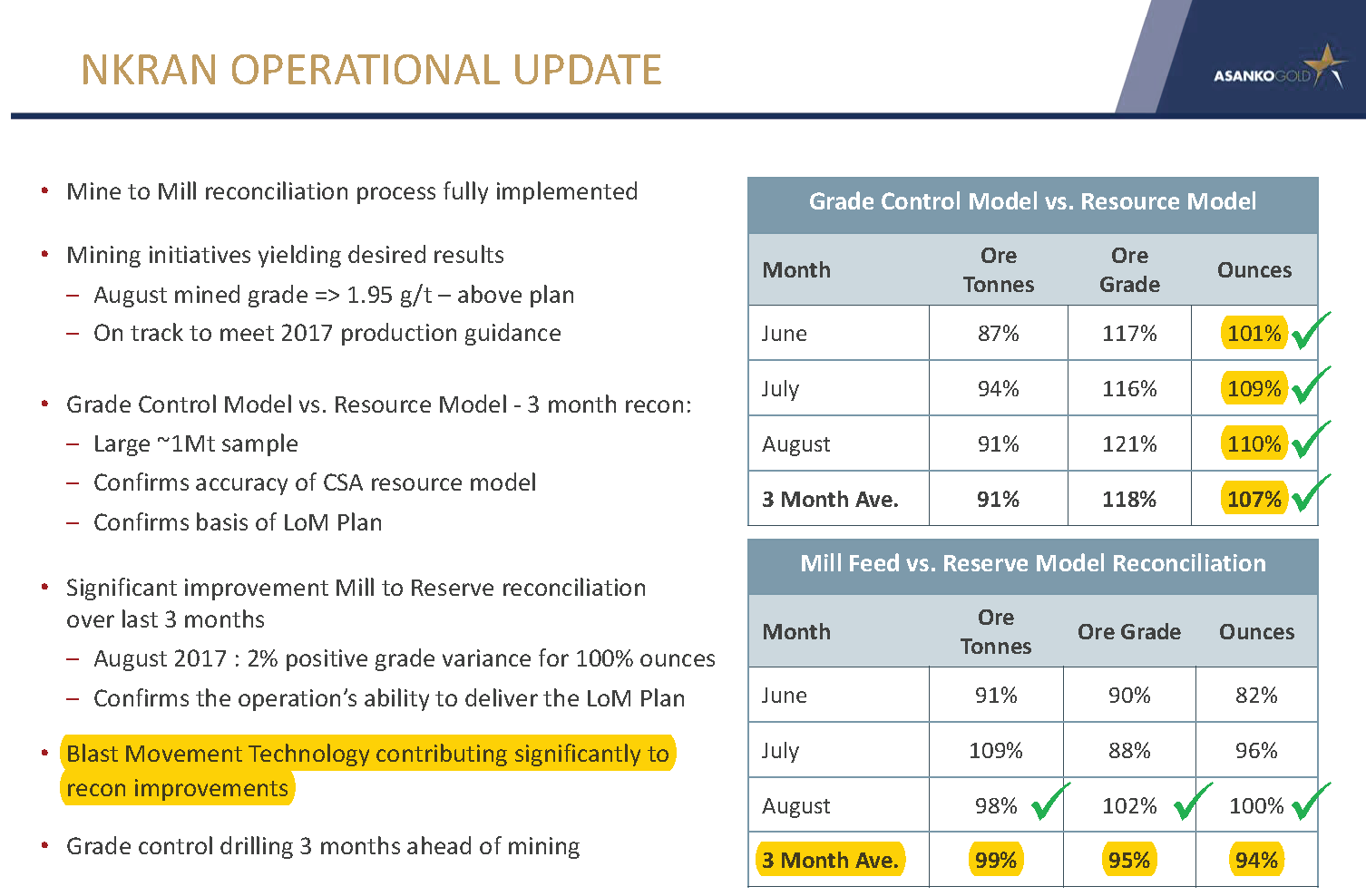 Posts, technical articles and videos on how our customers make every ore blast more profitable.

BMT’s blast movement technology was singled out by Asanko Gold as delivering material improvements in ore grade and ounces in its September Operational Update*. Key highlights include:

“During July, BMT’s consultant, Dzigbordi Akorli, trained Nkran’s geology team, who have used this knowledge to optimise monitoring of ore/waste boundary movement and to translate this movement into new dig lines,” said Jacques Janse, CEO, Blast Movement Technologies. “Obviously, these process improvements have delivered the expected results for Asanko and underpin their ability to deliver the planned grades and volumes of ore.”

Peter Breese, President and CEO, commented “The mining interventions we put in place in July at Nkran are starting to yield very encouraging results and the blast movement technology is making a significant contribution to the management of ore losses and dilution, as evidenced by the positive variances we are seeing in grade and ounces. The continued positive resource and reserve reconciliations clearly confirm the Life of Mine plan with respect to our future expansions”. Read the full Asanko operational update here, read Peter Breese’s Denver Gold Forum presentation or watch the webcast.

On Sept. 22, financial services firm Raymond James rated Asanko Gold as “Outperform” (setting a price target of $3.50 per share, a significant increase from the current price of $1.26).

This website uses cookies to improve your experience while you navigate through the website. Out of these, the cookies that are categorized as necessary are stored on your browser as they are essential for the working of basic functionalities of the website. We also use third-party cookies that help us analyze and understand how you use this website. These cookies will be stored in your browser only with your consent. You also have the option to opt-out of these cookies. But opting out of some of these cookies may affect your browsing experience.
Necessary Always Enabled
Necessary cookies are absolutely essential for the website to function properly. This category only includes cookies that ensures basic functionalities and security features of the website. These cookies do not store any personal information.
Non-necessary
Any cookies that may not be particularly necessary for the website to function and is used specifically to collect user personal data via analytics, ads, other embedded contents are termed as non-necessary cookies. It is mandatory to procure user consent prior to running these cookies on your website.
SAVE & ACCEPT