Anaconda Mining, a Canadian Junior, operates the Pine Cove Gold Mine and Mill located just outside of Baie Verte, Newfoundland.

Back to All Case Studies

As a result of accurately accounting for blast movement, the mine reduced dilution from 20% to less than 5%2:

In an example blast from Pine Cove mine:

By translating post-blast polygons in one blast, the mine:

At Pine Cove, blast movement entirely displaced the small ore blocks. By accounting for movement in this example blast, the mine avoided 23% dilution and recovered an additional 2,912 t of ore. 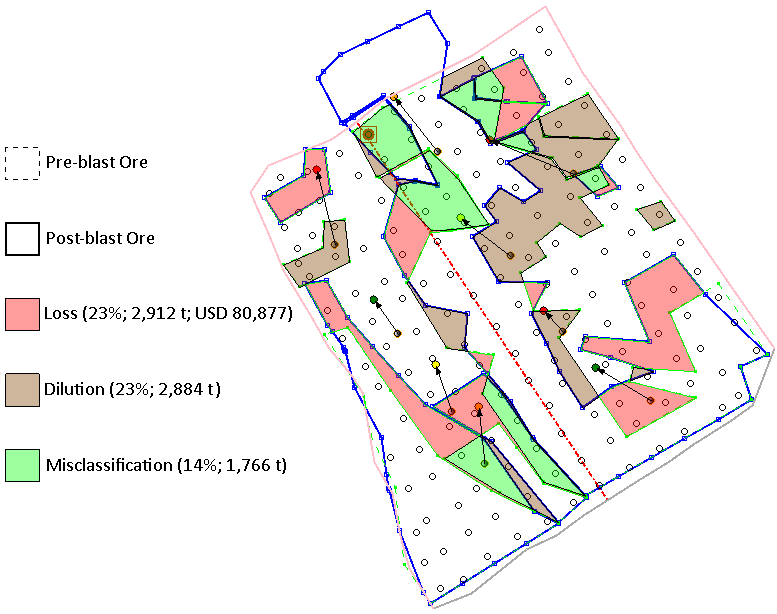 “The decrease in overall dilution, from 20% to less than 5%, has made a huge impact to our project, not just in improved economics but also in reduced tailings production and overall project footprint. Using the BMM System we can mine small zones of ore—increasing overall recovered tonnes. Without BMT we would not attempt to recover these small polygons due to movement.”

Jordon Cramm, Mine & Engineering Superintendent, explains how the BMT solution has improved the blasting practices, and reduced dilution and ore loss at Pine Cove. The system has increased recovered value by US$15 – 30k per blast.

The thin areas experienced high dilution, over 20%, which resulted in lower feed grades through the mill. Using the BMM System, Pine Cove has reduced dilution to 5%, increased the grade and limited the waste going to the mill: realising US$15,000 to $30,000 dollars per blast.